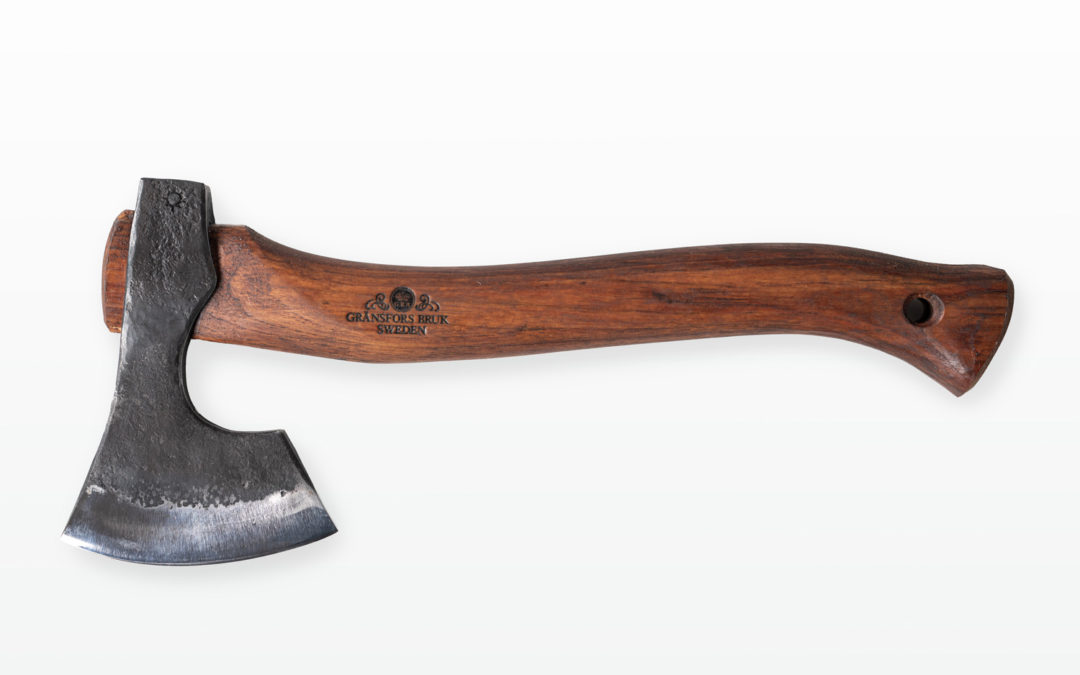 The Gransfors Double-lugged Bearded Axe is the latest edition to the new Historiska Yxor line of limited edition historical axes. There are more pictures on their website as well as the specifications and information (in Swedish).

I have partly translated the information using google and interpreted and elaborated on based on my knowledge of axes. 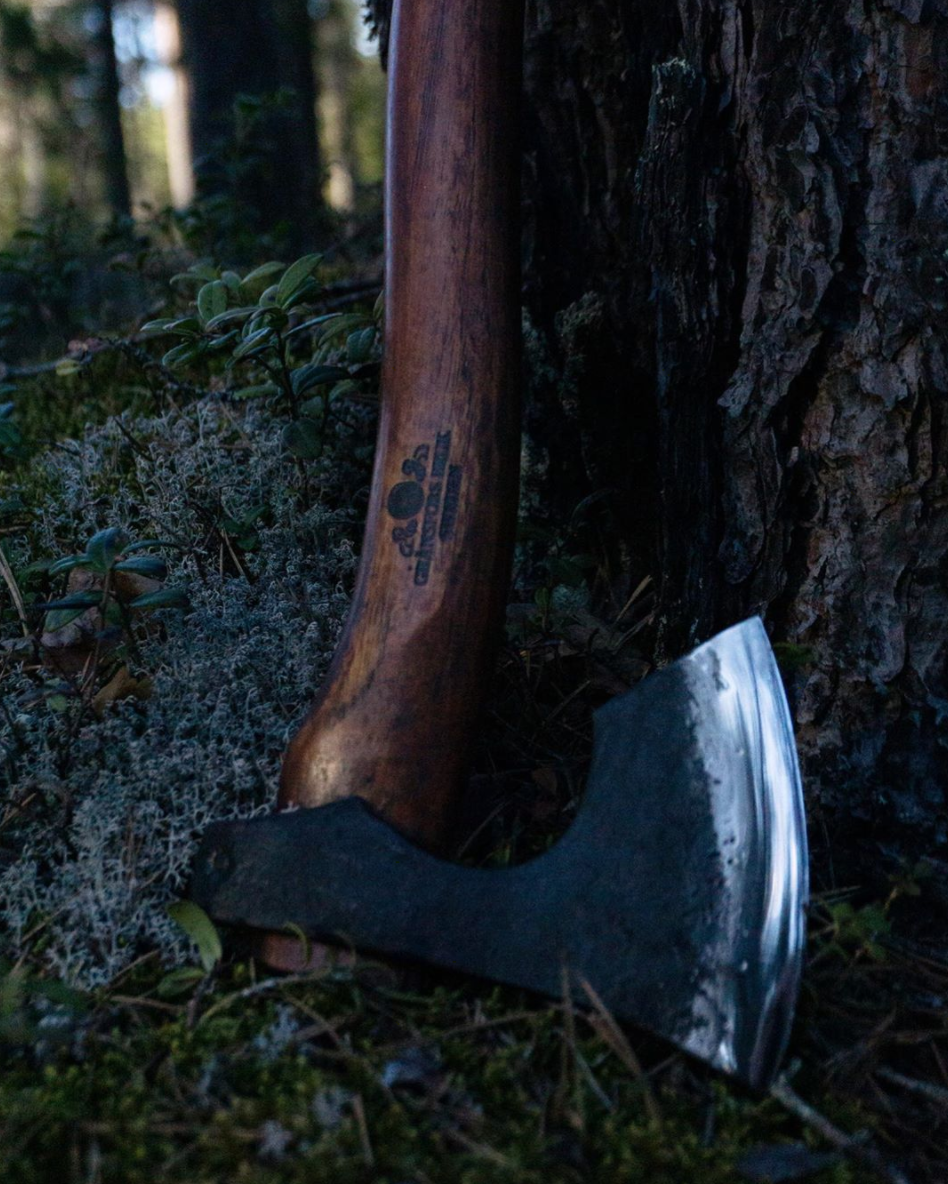 The design is Scandinavian / Northern European in origin (Vikings) from the 600s.

It seems as though the Doubled-lugged bearded axe is forged using a hand-wielded hammer and anvil rather than their power hammers and dies. The haft (handle) looks to be hung similar to the more modern axes, with an eye and wooden wedge.

The sheath (axe mask if you like) looks to be of a higher quality even than those included with Gransfors bruk’s other axes. It features stitches rather than rivets and the edges are cleaner.

These axes are forged by Fredrik Thelin. 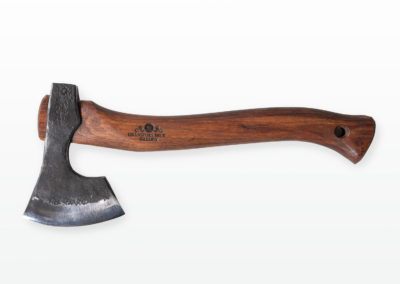 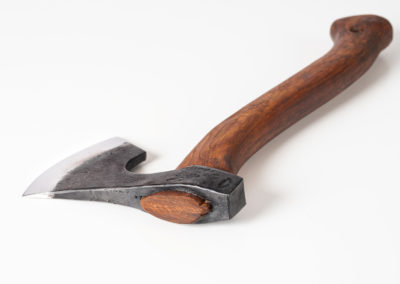 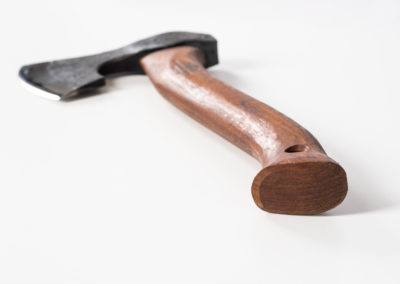 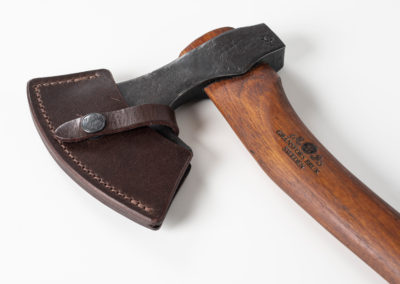 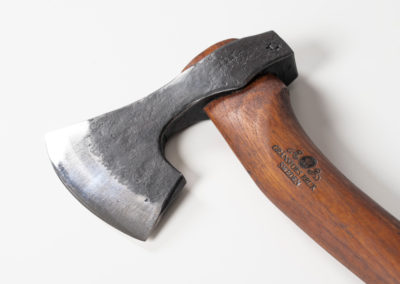 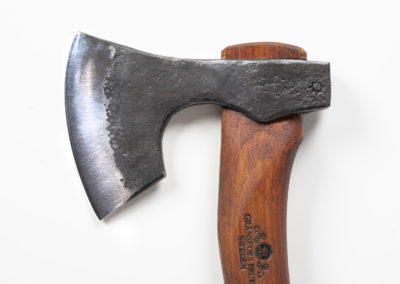 The price tag of 5,400 Kroner converts to around 532 USD. So this is intened for the collector rather than the commoner.

Like the Skäggyxa med skaftholk, that is the Laminated Bearded Axe with Eye Socket, this will be initially available only to the Swedish market.

You can view the Gransfors Double-lugged Bearded axe on their website in Swedish here: https://www.gransforsbruk.com/produkt/gransfors-tvaflikiga-skaggyxa/

Gränsfors Two-headed Beard is based on a Swedish model that was developed during the 600s and is considered by some to be the crown jewel of the ancient Nordic axes, both admired and feared far outside the Nordic region for its beautiful shape and sharp edge. The early car came to the north from western and central Europe and then developed into two variants: a two-tier and a four-tier.

The two-tab car was characterized by two tabs on the underside of the shaft hole. The car was often large and heavy with a long shaft and a long drawn-out edge (beard). The beard is characterized by the refined shape given when casting a wide edge of the smallest possible material. The beard ax is mainly used for wood processing, for the smooth cutting of, for example, planks. The bearded ax was particularly important in boatbuilding and in the erection of so-called shift workshops, which were built with horizontal planks. Recently, it also became common for the shaft to be replaced with a shorter shaft, depending on how the ax was to be used.

Gränsfors Two-tailed Beard is a traditional hand forge with collage, hammer and anvil. This is a very complex and time-consuming process, which is why it is only produced in very small series. The ax is stamped with serial number, year of manufacture and the smith’s stamp. Gränsfors Two-tailed Beard ax is forged with a slightly shorter edge (beard) than was usual around the 9th century, and shafted with a shaft designed for wood finishing and counting. Because of its size, the Skäggyxan is therefore also suitable to take on hiking and for outdoor life.

The original from the 11th century with a longer edge (beard) and long shank was found in Gothem on Gotland and is today on display at the Historical Museum in Stockholm.

Gränsfors Two-tailed Beard comes with a hickory handle that is treated with linseed oil to obtain a beautiful patina, as well as an extra thick, specially adapted edge protection of vegetable tanned leather.

Gränsfors Two-tailed Beard comes with a 20-year warranty. However, Gränsfors Mill cannot guarantee a return product given that the ax is manufactured in a limited edition. If replacement product is not available, full refund will instead be paid.

Gränsfors Two-tab Beard is forged by Fredrik Thelin. Fredrik has worked as a professional blacksmith for over 25 years and has done his basic education at Gränsfors Bruk. Over the years, Fredrik has worked closely with Gränsfors Bruk, focusing on axes, forging and as a course leader for the forging courses. He is also the founder and master smith at NorrHälsinge Järnsmides Gille