A Nata is not a Hatchet 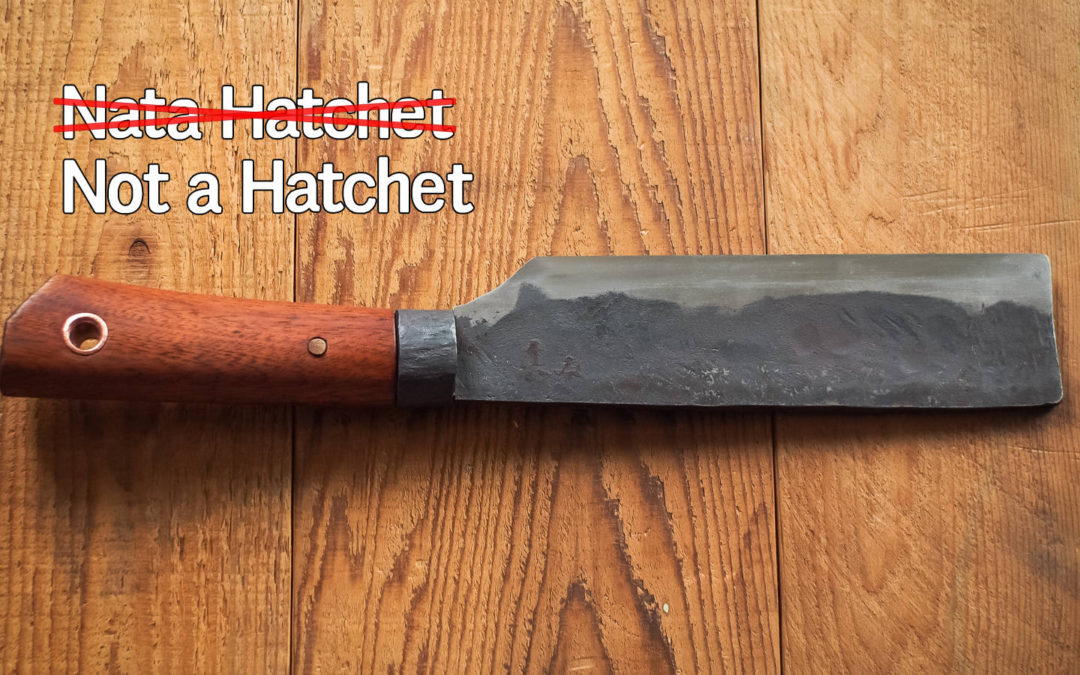 The Japanese Nata is often referred to as a hatchet. It’s time that this Japenese machete stops pretending and admits it is not a hatchet. I explain why.

First let’s define what an ax and a hatchet are, starting with the dictionary definition.

Here is a definition of a Japanese nata. The source is omitted because it is wrong.

The nata is short-handled (some of the time) and is used with one hand. It is also used for chopping and splitting wood. So far it sounds like a hatchet.

Beyond Dictionary and Common Usage

In other words we can’t always rely on dictionary definitions.

Just because enough people call a nata a hatchet doesn’t make it a good definition.

Four Reasons Why a Nata is Not a Hatchet

1) Axes have a Handle Longer than the Blade

2) Axes have a Poll opposite the blade

Additionally, axes have a poll (or butt), even if it is short, where the blade is at least partially offset by weight opposite the blade and further past the handle. There are a few exceptions to this, such as a fireman’s axe that has a spike instead of a poll or a double-bit axes where the poll is replaced by another bit and some tomahawks or battle axes which have no poll at all. However, axes that have no poll still have the other three characteristics mentioned.

I have not seen a nata that has a poll.

Axes have a cutting edge that is spaced out multiple widths away from the handle.

On an axe the part of the head that is perpendicular to the handle (the cheeks) are shorter than the cutting edge. There are some splitting axes which have a cutting edge about the same length as the cheeks. In these exceptions they have the previous 3 characteristics.

I have not seen a nata that has a cutting edge that is longer than the cheeks.

Below is a picture of the most axe-like Nata I’ve seen. I might even be willing to concede it is a pseudo-hatchet. But it is not a true hatchet. It’s not a hatchet because it only has 2 of the characteristics listed above.

Axes often have all four of the above characteristics and at a minimum have three of them.

A Nata is axe-like but not an Axe

I realize that one could cite various sources (like the erroneous definition at the beginning of this article) that refer to a nata as a hatchet (and also a froe, really?). But clearly a nata is in a different category from a hatchet or one handed axe.

I’m not anti-nata. I’ve never used one but I think natas look cool. I have a great affinity and appreciations for Japanese tools and weapons. However, I think that describing a nata as a hatchet is confusing, inconsistent, wrong and shouldn’t be done. A nata is not a hatchet.