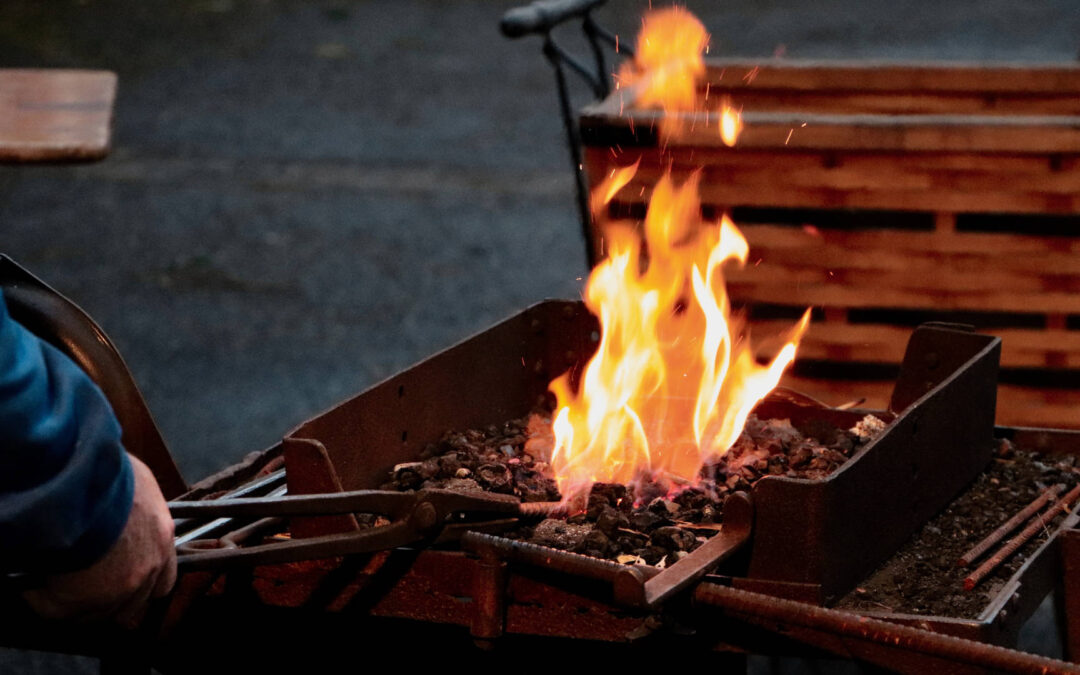 Some episodes clearly have a stronger group of smiths than others. There are episodes in which the runner up produced a finale weapon far superior as compared to a winner in another episode.

There could also be a fantastic smith, but if they aren’t experienced in using a coal forge and end up on one of the episodes where those are used, they might do very poorly as compared to another smith who would do better in that environment. They could be asked to make an obscure pattern of Damascus they’ve never done before and lose because of that.

These and other factors have led to a few controversies over the years. Here are four controversies that have resulted from 8 Seasons of Forged in Fire.

1. Josh Smith: The best Smith on Forged in Fire who didn’t Win

Josh Smith is incredibly talented. He was the youngest ABS Master Smith at age 19. He came into Season 3 Episode 5: The Kora Sword, with 25 years of experience. He made a clinic out of the first 2 rounds. He then went on to the finale against then 19 year old wunderkind Liam Hoffman.

Josh crafted an incredible and high performing Kora Sword. It is among the best finale weapons in the show. Judge Doug Marcaida called it “One of the most visually stunning blades we’ve ever seen in this forge.”

Per Doug, Josh’s Kora had better balance and in my opinion had beautiful fluting. But the judges ostensibly decided to discount the heaviness of Liam’s Kora while choosing to emphasize the rounded handle on Josh’s Kora that caused the weapon to roll in the hand.

They are the judges and it is their call.

I do like Liam’s Kora better than Josh’s. I like the look and I believe the more subtle forward curve would more effective at chopping than Josh’s design. But the controversy is that if Josh had been in any number of different episodes and produced a finale weapon of a similar caliber he would have easily won.

Josh Smith came back in Season 4 Episode 1: Judge’s Pick. In this episodes Judge’s got to pick a smith to represent them as their “champion”. He was Jason Knight’s pick. Jason Knight was one of the judge’s for the Kora Sword episode in which Liam Hoffman won over Josh. When Jason said why he picked Josh he said, “You made the best blade that didn’t win.”

Josh again makes it to the final round and faces off against Doug’s pick Mareko Maumasi.

Josh produces a beautiful Ida sword with a wonderful Damascus pattern and fuller. It performs in the kill test and sharpness tests. Mareko’s sword did not do as well in the sharpness test. But Josh loses some pieces of his blade in the strength test. Tragically, Josh knew this was a risk because a test blade he made with the same steel chipped when he struck it against an antler back at his home forge. Perhaps the aggressive twist put too much strain on the steel or maybe the heat treat wasn’t quite right.

Mareko picks up a bend in his Ida in the strength test but the edges of his weapon were intact. Because of the chipping Josh loses to Mareko.

2. J. Nielson’s Weak Bone Chop When Using His Own Knife

J. Nielson has made a name for himself rage-beating weapons into hard objects you would never rationally hit a knife against. Often the recurring strength tests administered by J. involves an antler chop (or some type of bone), where the antler/bone is bolted to a solid platform, then the knife is beat “mercilessly and repeatedly” against what is essentially minerals. He also grunts like a tennis pro while doing this.

However, in Season 8 Episode 7: Judges Home Forge Battle, J. Nielson goes limp-wristed in the bone chop test he has to do against a blade he has forged. First off he uses zip ties to “secure” a bison jawbone to a rickety vise. On the first strike both zip ties break and the jaw bone falls to the floor. Rather than properly affix the bone to a solid object, he proceeds to just hold the jaw bone with one had while striking it with the knife he holds in the other. He clearly doesn’t use his full effort to chop the bone. It is a weak effort.

Perhaps because he has seen the destruction caused by his monkey-striking weapons against antlers and didn’t want to destroy something he spent a week forging. But after bending, breaking and chipping numerous blades over numerous seasons, he owned it to the fans to do a proper J. Nielson bone chop on his own knife, which he failed to deliver.

Controversy: J. Nielson’s limp-wristed bone chop with his own knife

3. This Runner Up Gets their Axe on the Wall but the Winner Doesn’t

One of seven-season host and general badass Wil Willis’s phrases is “Looks are secondary to performance”. This is bourn out in stark contract in season Season 1 Episode 3: Viking, which also introduced fan favorite Ryu Lim.

Ryu is a very talented smith who at the time of filming had 17 years experience. He also has a distinctive bravado and swagger which might be off-putting in others, but is an endearing quality for Ryu. If you look over on his Instagram page you can see he has a variety of fantastic blades including some awesome Khurkis.

In this episode, Ryu talks about how he’s never used a hydraulic press or power hammer before. He uses traditional techniques. Doug compares Ryu to the Filipino panday “another term for bladesmith from the old ways”.

I admire the quality he is able to produce despite minimal equipment and resources.

I think this explains some of the rugged look of his work during this show. Even the very best smith’s struggle to put together a polished and professional looking blade in six hours (later reduced to five hours) and to do so without power hammers, hydraulic presses and belt grinders is nigh-impossible. Ryu would likely dominate if he was on one of the episodes of the show where they only had coal forges and no power tools.

In the finale, Ryu faced off against Jonathan Porter and each smith was tasked with crafting a Viking Battle axe.

Porter put together a good looking Viking Axe that was durable. In fact this axe is displayed prominently on the wall in the Forge in at least two seasons afterwards. But he makes several bad choices on his design.

First he chooses a round handle, which is poor for indexing. Next is the axe head scale, which is too small for the length of the handle. Thirdly, he places unnecessary and non-functional wraps on the haft, which makes it so your hand can’t travel down the handle in a two handed swing. He also decides to burn part of handle which I dislike but if he hadn’t made the former three mistakes I’d be willing to look past this last one.

Nothing against Jonathan Porter, he is obviously a skilled smith with great technique. Unfortunately this axe was a well executed but poorly designed. In summary it looks good but doesn’t function well.

Ryu’s axe is a bit on the rough side. The axe head is off-center from the haft and the haft itself looks slapdash. But it functions well. The handle design is easier to index and control, the weight of the axe head makes it an excellent chopper. As Ryu states, “It doesn’t have to be pretty to split skulls.”

Ryu’s “raw and rough” axe is definitely among the most rugged finale weapons presented by a Forged in Fire champion, but why is Jonathan’s axe prominently displayed on the wall of the forge but Ryu’s isn’t when Ryu won?

Jonathan Porter’s Viking Axe can be seen hanging on the wall in the “deliberation room” in Season 2 and behind the judges table in season 8.

Controversy: The runner up has their axe prominently displayed at the Forge but winner Ryu Lim does not

When I started watching Season 8 of Forged in Fire I wanted to start with episode one and found the episode wasn’t listed. Season 8 started with Episode 2. So I did some digging on why Episode 1 had been scrubbed. I found the name of the episode is “Veteran’s Knife Special” and was intended to be a special salute to veterans.

Forged in Fire is a United States based show. So presumably the Salute to Veterans was intended to be a salute to United States military veterans.

But one of the contestants, whom I won’t name, apparently salutes veterans of a very different armed force.

One of the smith’s had tattoos associated with a racist, fascist and evil regime from 1940s Germany. I’m not going to go into specifics of the tattoos.

While it seems there was an effort to literally cover up these tattoos during filming, some sharp eyed viewers were able to see them when it aired.

It is incredibly sad that someone would get tattoos associated with this hateful political ideology and military units responsible for committing countless war crimes.

It makes perfect sense the history channel would not want to give a platform to or be associated with a person who has chosen such tattoos.

What doesn’t make sense, it how he made it onto the show in the first place. Perhaps he was vetted remotely and it wasn’t until he arrived at the forge they realized he was festooned with racist imagery. So rather than disrupt their filming schedule, they just had him cover the tattoos as best he could.

It’s also too bad the vetting process failed and they allowed this smith to be a part of the show and that an episode was essentially lost from season 8. It’s also a huge disappoint for the other three smiths whose show has been scrubbed from existence.

Controversy: Episode was scrubbed from the internet due to a smith with racist/war criminal tattoos.

What do you think of these Forged in Fire Controversies?

That is my list of Four Forged in Fire controversies. Do you agree? Are there other things have have happened you think are controversial?